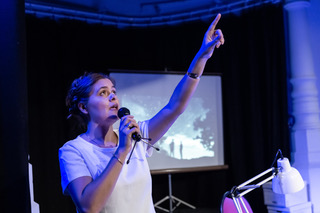 In the year 2,002,018, the space craft Pioneer 10 arrives at the giant star of Aldebaran. In 1945, Tom and his brother Cor lose each other in war. Tom became part of one of humanity’s greatest successes - the space programme; whilst Cor became a number in humanity’s greatest failure - the concentration camp system. Generations later, their great-niece goes on a journey to reunite them. In an epic, bittersweet story of heritage, disappearance and space travel written between Europe and America, Satellites asks questions about who and what we leave behind, and how we can begin to measure the immeasurable.